What is up with the crazy Pentecostal Churches?

I'm not about to start some "holy war" here, nor do I really get off on talking about religion or churches for that matter, but what in the hell is up with those crazy Pentecostal places of worship? To me, it seems that those particular churches often attract insanity and people who are mentally ill, and it gives them the freedom to run amok in a room, jerk, twitch, convulse and yell, with other like-minded kooks.

If you're not aware, Pentecostal churches harbor what is often called "Charismatic Christians" among other labelled individuals who claim to feel the holy spirit or holy ghost in such a way that they can "speak in tongues" and also vibrate, twitch, drop to the floor and flex through a series of convulsions while looking more like they need to be loaded up in an ambulance somewhere and treated for mental problems and central nervous disorders.

---Side note: If you have ghost stories that doesn't relate to the holy spirit, please share them here: http://myths-legends-folklore.blogspot.com/2011/04/share-your-supernatural-occult-ghost.html

Oh, yes, I said "speaking in tongues." That is where you speak in an unintelligible manner, supposedly some universal divine language that only certain people can understand (ha-ha!). It can go something like this, for example: "Oh sama kaba chaku buku boogy boggy. Jaba jaba dada goo goo. Oh ma ta baja baja." Ha-ha-ha! Yeah, it sounds like senseless baby talk, if ya ask me!
Hell, I can raise my hands in the air and chant "maza taku shaku baja" over and over while twitching and jerking, and could put on a good show if I had to, but there would be nothing divine about it. I suppose one could call that crazy display whatever they want, but I would just feel like some mentally challenged person wanting attention, if I did decide to perform such things. LOL!

Anyway, these particular churches often mimic a madhouse with all the shouting, screaming, yelling, running, jumping, and people getting pushed down to the floor and/or falling to the ground pretending to go into violent fits and seizures and whatnot. In fact, there is a small amount of Pentecostal churches that handle snakes.
A quote from Wikipedia about snake handling & Pentecostal Churches:
"Some of the leaders in these churches have been bitten numerous times, as indicated by their distorted extremities. Hensley himself, the founder of modern snake handling in the Appalachian Mountains, died from a fatal snakebite in 1955. In 1998, snake-handling evangelist John Wayne "Punkin" Brown died after being bitten by a timber rattler at the Rock House Holiness Church in rural northeastern Alabama. Members of his family contend that his death was probably due to a heart attack. However, his wife had died three years prior to that - after being bitten while in Kentucky. Another snake handler died in 2006 at a church in Kentucky." 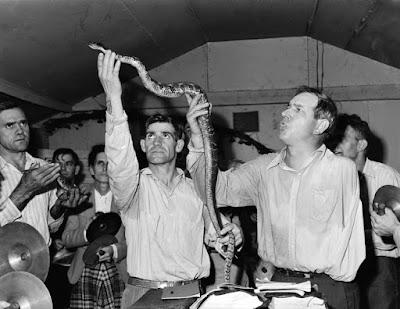 I'm not into organized religions, as I usually keep my crazy beliefs and ideas to myself, but this particular denomination of Christianity is a bit extreme, in my opinion. Many other sects of Christianity actually seem to detest the Pentecostals, and I can see why they would get riled up with their bizarre practices. I mean, WTF? They just changed the doctrine to suit them, a little over a hundred years ago, and started this "Pentecostal movement."
I don't even like the way that sounds, "the movement" or some of them call it a "revolution." This particular denomination sounds more and more like a cult - the more I learn about it. Oh, don't get me wrong, they aren't the only ones that sound like a thriving cult, but like I said earlier, I'm not starting some silly-ass holy war on this blog.
Also, I realize that not all churches are the same and there may be some Pentecostal places of worship that are at least semi-normal. Many of you may be very happy to be apart of this denomination and they may actually be good for your well-being. I'm only speaking about some of the more hardcore ones that I've heard about and/or talked to people who have been that had bad experiences, etc.

I've heard many times that a lunatic is oftentimes just a "failed mystic." Just think when some of these people become ex-Pentecostals? Yep, the psychologists are going to be busy with the ones who ended up having bad experiences with this cult, sect, denomination, religion or whatever you want to call it. I've read about how many people suffer from "Post Traumatic Stress" after turning from this type of holy practice. The way I look at it, is that some people just have to find out the hard way. If you think you're doing what is right, then go for it - whatever it may be - but never try to shove your beliefs and bizarre rituals down other people's throat.

Now, for a couple related resource links to derail you from this blog post...

* Pentecostalism & Insanity:http://ex-pentecostal.blogspot.com/2008/09/pentecostalism-and-insanity.html
* Pentecostalism from a child's point of view:http://www.violentacres.com/archives/250/the-pentecostal-church-and-the-holy-ghost-want-you-to-wear-pig-panties/ [Link is no longer valid]

---End of Post "What is up with the crazy Pentecostal Churches?"
Posted by Obscurely Diverse at 12:47 AM