If you're not health-conscious and/or you're looking to splurge with a nice, tasty, high-calorie snack, Bacon & Cheddar Potato Skins may be exactly what you're seeking.
I'm not talking about the potato chip version or the kind you find in the frozen food section @ your local market: 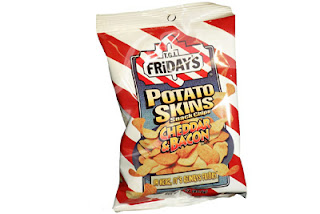 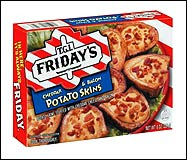 I'm talking about the kind you make at home, one step at a time.
They're fairly easy to make, and since you'll be learning how to make them on your own, you can experiment with different ways to cook 'em after you learn the basics. Plus, potato skins don't have to be stuffed with bacon & cheddar either, but I'm choosing this recipe because it is one of the more tasty versions of potato skins, in my opinion of course...

You'll need a few medium sized potatoes (depends on how many skins ya wanna make), a small bag of shredded cheddar cheese, several slices of cooked bacon (chopped) or you can substitute the bacon with store-bought bacon bits if desired, a small amount of stick butter, seasoned salt or regular table salt, black pepper, and whatever else you may want to add to this scrumptious snack.
First, bake your pre-washed whole potatoes in the oven after you have stabbed a few holes in them with a fork, at about 400 degrees for 50 to 60 minutes - depending on how many potatoes you use. You can always save a lot of time and simply microwave the potatoes - just remember to stab holes in them so they can vent while cooking.
During this time, it would be a good idea to go ahead and cook your bacon. After your bacon is done, get a knife and chop the slices into fine pieces or crumble it by hand; it doesn't matter either way.
Take the potatoes out of the oven when they are done; let them cool for a bit. Slice each potato in half lengthwise and then spoon or fork out each potato half in the center and around the edges while leaving some potato, as if you're carving a bowl or whatever.

At this point, it should look something like this: 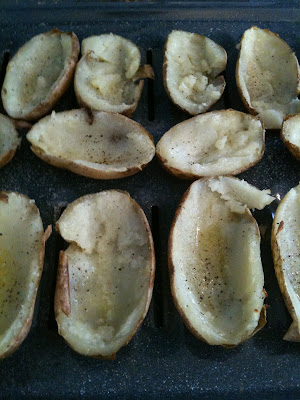 Now, go ahead and cut your broiler on high (if you use the lower heating element in the oven during this step, it will take longer). Add the butter to the inside and outside of your potato skins; salt & pepper to taste (I prefer seasoned salt over the regular). Put them on the top rack in the oven for about 8 minutes. Take them out, add the cheddar cheese and chopped bacon, then put them back under the broiler for another 3 or 4 minutes or until the cheese is melted.
It should now look sort of like this: 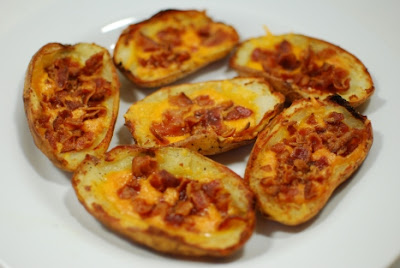 As you can see, it is not that hard to make. You may want to experiment with other types of toppings, ingredients, etc., after you make these a few times. I've heard that some people actually freeze the potato skins if they have too many leftovers, and reheat them later on. Personally, I don't think I'll have any problems with leftovers. Ha-ha!

If you'd rather watch a video that pertains to "how to make bacon & cheddar potato skins," look below:


[Video is no longer available]