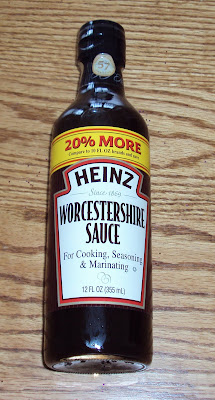 When it comes to cooking steak, whether it is a T-Bone, Rib-eye (my favorite), Sirloin or whatever, there is no better marinade in my opinion than the Worcestershire sauce & Italian Dressing combo.

But before I type about how I prepare my steak using these vinegar-based marinades, lets talk a bit more about this blissful Worcestershire sauce that is truly a culinary delight and a chef's best friend.

I've been using this stuff for years, mostly the Lea & Perrins and Heinz brand, and I have found it to have many uses whether it is used in conjunction with other marinades or simply by itself.
I find it to be especially great for pork and beef. I occasionally use this particular sauce for chicken - mainly to help tenderize and keep it moist while baking, but I favor seasoned salt and hot sauce when it comes to baked chicken wings, legs, and so on. I've heard that some people use Worcestershire for certain types of vegetables, as well. I've used it in baked beans before and also while preparing brussel sprouts, but other than that, I've mainly used it for steaks, hamburgers, roasts, and boneless pork chops. Update: I've just tried this beloved Worcestershire sauce on Swai fillets (catfish from Southeast Asia) and it turned out great when they were baked and also when fried! I used it as a marinade before I battered 'em (when frying this fish), and when I tried the baked version of Swai fillets, I just cooked them in with the sauce, seasoned salt and pepper. It was an experiment, as this particular type of fish needed all the help it could get - since it was so mild tasting when I cooked it before with regular seasoning.

Another thing I like about using Worcestershire sauce as a marinade, is that it isn't overly loaded with salt like a lot of other marinades are. The bottle I have right now, says it only has 60mg (3% of recommended daily intake) per teaspoon. This means that I can literally soak the meat in this stuff and not have to worry about it being too salty.
Also, this type of sauce is very affordable. I'm currently using the generic version, often called the "private name/private label brand" and it is basically the same thing as big name brands. Well anyway, I got a 10 ounce bottle of "Fred's Worcestershire Sauce" for one dollar, and I can easily use it to marinate my meats of choice for 3 individual cooking sessions.

Okay, now what about this Italian Dressing?
Actually, I usually use it like most people - in salads. However, it also makes for a great, zesty marinade - especially when dealing with lean meats such as boneless pork chops. It adds oil, vinegar, and spices to the mix - along with its ability to help tenderize meat. I use about 1 part Italian Dressing per 3 parts of Worcestershire sauce or more, when cooking steak. I use it about half & half when dealing with extra lean steaks like Sirloin and New Strip steak, as well as lean boneless pork chops.

How I prepare steak:

I take the steaks out (usually two) of the package and throw them right into a big stainless steel skillet. I wash my hands and then gather all the stuff I need.
I stab holes in both sides of the steaks with a fork, then I apply seasoned salt and pepper to one side. I then add a small amount of Italian dressing on the same side. I then flip them over and I soak them with Worcestershire sauce. After that, I flip them over again, letting the seasoning sort of mix together, and add a bit more Worcestershire sauce - if desired.
I put the stainless steel skillet containing my two mouth-watering rib-eye steaks into the refrigerator. I leave the fork propped up and halfway stuck in one of the steaks, since I'll be using the same fork while cooking and also I'll be returning a few times to flip them back over while marinating.
I'll let them set in the fridge for about an hour, then I'll take them out and flip them over and put them back in the fridge for another hour. After two hours of marinating in the refrigerator, I'll put the meat-filled skillet on the stove and let 'em sit at room temperature for 30 minutes to one hour.
I'll turn them over once more, and then start frying them over medium-high heat for about 10 to 12 minutes, turning occasionally.
I generally like my fresh-cut steaks medium-rare if they're thick cut, and medium-done if they are thin or regular cut.

That's it! There's no big special secret here; it's all in the marinade and how long you cook 'em!
Cheers!

---End of Post "Worcestershire Sauce & Italian Dressing - My favorite marinade for steak!"
Posted by Obscurely Diverse at 1:05 AM