A planet with two suns has been discovered... 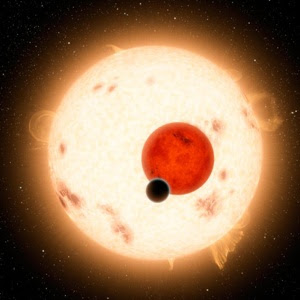 Yeah, this subject isn't so mundane, but hey, I never said that ALL topics on this blogspot blog must be limited to our little Earth World, eh? Ha-ha!

Anyway, it has been a hot topic of late, as astronomers have discovered a planet with two suns. Damn, I suppose that if you were able to live there, you may be finding yourself asking this earthly question: Got sunscreen?

Below, I'll provide a couple resources that speak about this unusual, newly discovered world with two suns, that will most likely impact your mundane life about as much as whether or not the dwarf planet Pluto contains big frozen cakes that were fried in fat and/or galactic, arctic-like doughnuts for alien delight... ha!

Resource Link #1) It's a real-life Tatooine. A spectacle made popular by the "Star Wars" saga — a planet with two suns — has now been confirmed in space for the first time, astronomers revealed. Scientists using NASA's Kepler space telescope captured details of a giant planet in orbit around the pair of binary stars that make up the Kepler-16 system, which is about 200 light-years away. Read more, here: http://news.yahoo.com/planet-star-wars-tatooine-discovered-orbiting-2-suns-181404397.html

Resource Link #2) Astronomers announced that they have discoverd a rare planet that orbits two stars, like Tatooine in the "Star Wars" films, adding to a growing inventory of alien worlds in the curiosity shop of the cosmos.
Detected by the NASA's $600 million Kepler space telescope, it is the first confirmed solar system of its kind, turning a Hollywood fantasy into an astronomical fact. Called Kepler-16b, the Saturn-size planet circles its twin stars in the constellation Cygnus about every 229 days, the researchers reported in the journal Science. Read more, here: http://nypost.com/2011/09/15/planet-with-two-suns-discovered-a-la-star-wars/
I suppose that the main lesson and/or benefit from this expensive discovery using a high-dollar telescope, is that imagination is a powerful thing, and more and more so-called "science fiction" becomes a reality, as time marches on. Hmm... Well... Hell, I already knew that! Ha!

Semi-related, not-so-mundane link: "Aliens from another world? Were the first Earthmen ancient astronauts?"

---End of Post "A planet with two suns has been discovered..."
Posted by Obscurely Diverse at 12:45 PM