I got reminded about this subject the other day, when reading about another defunct satellite crashing back down to Earth. If you're interested in reading about that particular crash that spawned from our very own "outer space junkyard," follow the link below:

"A six-ton NASA science satellite crashed to Earth on Saturday, leaving a mystery about where a ton of space debris may have landed. The U.S. space agency said it believes the debris ended up in the Pacific Ocean, but the precise time of the bus-sized satellite's re-entry and the location of its debris field have not been determined." Read more, here: http://news.yahoo.com/falling-six-ton-satellite-headed-toward-earth-011725135.html [link is no longer active]

I remember several years ago, when I first heard about the massive accumulation of space debris that is orbiting our lovely blue planet. I couldn't help but think: "Damn, we have already polluted and junked up our planet enough, while neglecting to clean it up before leaving, and what have we done? We are now busy littering up outer space and turning it into a junkyard, and we haven't even been up there very much, yet!"

Many people may think it is no big deal, and perhaps it isn't the end of the world. ...But to me, it is more symbolic than anything, as it represents mankind very well. Ha-ha! Okay, yeah, a lot of that junk up there was very useful at one time, I guess? Regardless of right or wrong, neat or messy, it surely can't be a good thing to have a junkyard orbiting your planet. Having junk collide with other satellites could obviously effect communications on Earth, wouldn't ya say?

At any less-than-mundane rate, lets look below at this fine image that describes some of the space debris at hand: 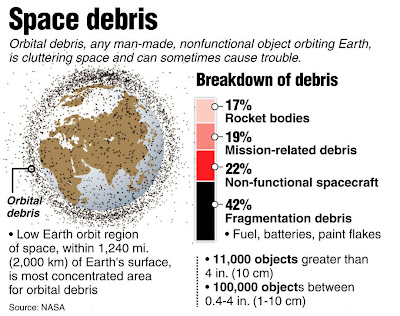 For the ones who are really interested in Earth's space debris that has turned into an outer space junkyard, I have found an excellent web page that is extremely elaborate over this trashy subject. This resource link will cover topics such as: orbital objects, satellites, space junk, and high-tech solutions for space debris - along with a lot of other additional content and information. You can find this useful resource, here:
http://www.geosats.com/spacedebris.html

Look out folks! The sky ain't falling, but some space junk may be... Ha-ha! Okay, that isn't funny, especially if the crap lands in your yard or, well, on you! Please note, the odds of getting hit with space junk is extremely low. They estimated the last satellite crash to be somewhere around a 1-in-3,200 chance of hitting and/or harming human inhabitants. Ahh, now that's such a sigh of relief...