I've recently stumbled across a few articles and videos over this silly debate, which has ended up turning into a legal battle, lawsuit, etc., between Oscar Mayer Hot Dogs and BallPark Franks.
By the way, I'm spelling the brand name 'BallPark' because that is how it's currently printed on their packages and not "Ball Park' - not that it really matters.

Yeah, you'd think that there's surely more important things going on in the world today, other than seeing headlines like "Wiener Wars" and so on, in the news media, but whatever. I say, "who cares?," but obviously there are tons of people that do, so lets get on with it...

If you haven't heard about any of this and are interested in the recent culinary calamity at hand, I'll get you started with a link to a short article; you can do a web search if you prefer videos.

Anyway, it starts off by saying:
"Everyone knows it's a dog-eat-dog world, but in Chicago's federal court, it was a dog-sue-dog world. Monday marked the beginning of the end of the lawsuit of the century. Oscar Mayer (owned by Kraft Foods) and Ball Park (owned by Sara Lee), the USA's two biggest hot dog brands, squared off in court in a trial to decide once and for all which frank is frankest." To read more, go here: http://www.delish.com/food/news/a38847/oscar-mayer-vs-ball-park-in-hot-dog-lawsuit/?GT1=47001

You know, I can't really say which is better; I rarely even eat hot dogs. I know for sure that I dislike Oscar Mayer's tasteless bologna, and I usually get Field or Bryan bologna instead, but this debate is about hot dogs and not pre-sliced roadkill (just kidding). It is just hard for me to remain serious while typing about the "heated debate" over who has the best Frank in the country.

When thinking about this lame subject, I can't help but think (other than "who cares?") that everybody has different taste buds and what one person likes, another individual may not. I also think about how unhealthy a hot dog is and how much sodium nitrite is put into those suckers. But, I'm not running a health blog over here. If you'd like to read about health & fitness subjects, click on over to my blog "Health & Fitness Guru."
Another thing that pops into my mind when I'm hearing about all of these "wiener wars," is how it has mainly just gave a bunch of writers a chance to amuse their selves with creative puns and senseless synonyms while typing or speaking about this poppycock.

I have a few questions... Instead of asking who has the best hot dog between Oscar Mayer and BallPark, I'd rather ask: Just what all goes into a hot dog? How exactly is it made? If I seen how you made it, would I still want to eat it?
Those 3 questions, to me, seem more important.

At any insane rate, if I really wanted to know who had the best "dog" or whatever, I'd ask the hot babe depicted below: 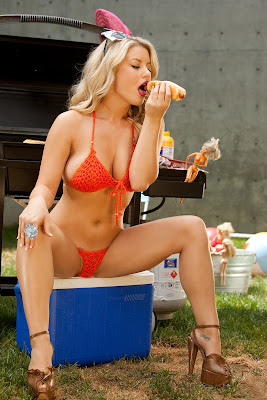 Side Note: If you're tired of boiled, microwaved, or sliced & fried hot dogs and don't want to use an outdoor charcoal or gas grill, I'd recommend the electric George Foreman Grill - a.k.a. the Lean, Mean, Grilling Machine. Cheers!

Click the image below, to view a wide range of George Foreman Grills: 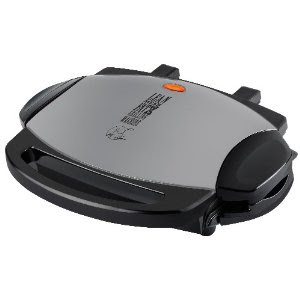 ---End of Promo
Posted by Obscurely Diverse at 5:11 AM