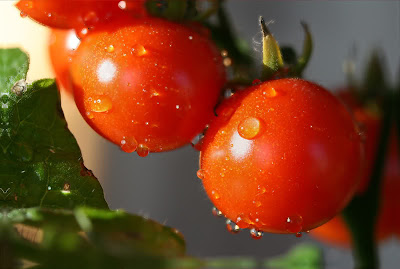 I usually try to put out at least some sort of garden every year, ranging from a small patch to a big corn field - depending on how much free time I have, if I got a late or early start, etc. However, I always grow tomatoes regardless of how much land space I'm using - whether I have room to plant anything else or not.

A few years ago, they came out with all that "grow your tomatoes upside down" crap, and I never even bothered giving it a try. You know, I think they promoted it by saying how you can grow tomatoes on your porch or patio by using these upside down hanging basket thingies. I must say, whether it works good or not, that it just looked too stupid for me to try; plus, I don't want red-fruit-bearing weeds all over my damn porch - I thought that was what the yard was for?

Anyway, I've always used the old, traditional upright growing methods when it comes to growing tomatoes, but this year I tried something different. My garden experiment this year was to allow the tomato plants to grow naturally (except for the use of miracle grow/fertilizer) without my control on what direction they take. By saying "naturally," I mean that I didn't use any cages, sticks, upside down methods or anything; I just planted 10 plants fairly close together and let them grow however they wanted, tumble over each other, etc.

Most people will tell you it's a big no-no, but I thought about it and figured I'd give it a try. Many people will say how if you don't get them off the ground they will rot. Hey, I'm not saying that it won't happen to a few tomatoes, but who cares? You should have loads of tomatoes anyway, so it's no big deal. Besides, you are always going to lose some due to garden pests, bad weather, etc. To make a long story short, my garden experiment was a flying success.
It wasn't a very pretty patch of tomatoes, but the yield was good and I didn't have to worry about keeping them tied up - nor did I have to go out and buy a bunch of cages, and so on.

I did notice a couple other things about letting them grow low to the ground: 1) they seemed to retain more moisture and did better during periods of drought; 2) they held up to high winds during bad storms. In fact, I know somebody that lives close to me, that lost a few of their tomato plants due to them breaking (during a wind storm) while being tied to a stick, but my ugly tomato patch wasn't even affected. That reminds me: a few years ago, I had a couple plants get so big, that they literally broke while being tied up - due to gravity working against them.

In closure, if you really don't care how they look, don't mind the extra weeds, and you don't want to be bothered with sticks, cages, and upside down growing gimmicks, just let 'em grow like they do out in the wild, and grow your tomatoes naturally and let whatever happens, happen. Just remember, if you choose this natural method, just make sure to plant your tomato plants a little closer together than you normally would, because they will use each other as support.
Anyway, I hope everybody had a good yield this year... Cheers!

Posted by Obscurely Diverse at 9:43 PM