Oops... Here I go again, with another blog post that isn't so mundane. But seriously, at least for today, I didn't mean to stumble across the age-old mystery of aliens, UFOs, and abductions, as this subject is becoming slightly jaded due to everybody and their grandma talking about the "ancient astronaut theories" involving flying saucers and those cool grey people that buzz around in their UFOs. In fact, I was thinking about those highly advanced space monkeys when I was a little kid, and never doubted that this place had been visited by aliens from outer space, many times. I guess it took a couple more decades of speculation and science fiction shows along with the addition of the History Channel and its Ancient Alien series, for the majority of the people to finally catch up to the notion. Ha-ha!

Anyway, the reason why I'm doing this short post, is because I recently ran across a funny looking image I found while surfing the Internet. It was a picture of a cute little UFO sucking up some poor innocent, fat cow. Oh man, the ideas and captions that came to me after viewing that image, seemed almost unlimited. I was going to use a picture editor and have some fun with it, but instead, I ended up searching online for "cow abductions." Yeah, how productive is that?

During my hastened search for the truth about our ancient alien hamburgers, I found an interesting video. Hoax or not, it was worth a view. I'll provide that in a moment...
But first, the 'Cow Abductions via UFOs' image: 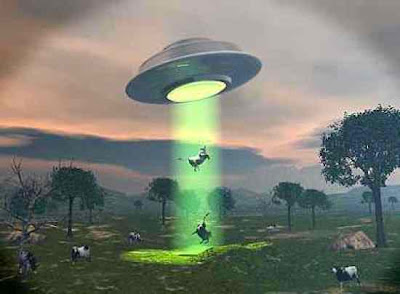 Another reason I find this cow abduction image funny, is that it reminds me of a guy I work with. I know this "very large" individual at my place of work who is not only lazy, but he often just sort of stands in one place and looks up toward the sky, as if he is waiting for a big cheeseburger to fall from the heavens. Well, when I seen that particular picture, I couldn't help but think, "they're working on it." Ha-ha!

Now, if you want more than a fictitious image that was used merely for entertainment purposes, and would like to read more about this debatable, semi-interesting subject, go here: "The Ox-Files: 'Mass cow sacrifices by aliens' sent White House into panic, FBI records reveal."

Cows have been related to UFOs for years and years. I suppose the aliens are supposedly "testing" again, but why a cow? I don't know, I like rib-eye steaks and other types of cow meat as well, and if you'd like to know how I marinate my beef steaks, go here: "Worcestershire Sauce & Italian Dressing." Ha! But seriously, some of these people report that their cows return back from the alien abductions, all mutilated with parts missing... And sometimes, the cows have been drained of all their blood and the organ meat is, at times, turned into the consistency of peanut butter, as if it has been affected by radiation and whatnot.

Draw your own conclusions...