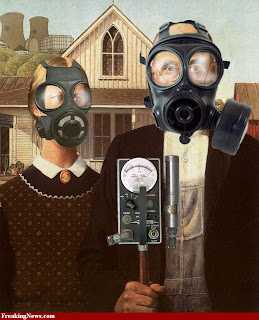 I've just read a few articles about everyday sources of radiation. Even though they were all quite common and most of them considered harmless, a couple of them surprised me.
Before I say anymore, I'll give a couple links below:

"9 Everyday Sources of Radiation - Should we be worried?" @
http://health.msn.com/health-topics/cancer/9-everyday-sources-of-radiation?GT1=31025

I read about a lot of common gadgets and devices that emit radiation. Things like: televisions, microwaves, cell phones, fluorescent lamps, watches, clocks, computers, smoke detectors, etc., and even ceramics and glass emit some form of radiation, but at low enough rates that they don't have a known effect on your health. However, even though these things emit small amounts of radiation, I'm sure it all adds up each year.

Some of the least suspecting sources, at least to me, was: Natural Gas, cigarettes and/or tobacco that you smoke. They say that sticky tobacco leaves absorb a fair amount of radiation found in nature or something like that, and I just really didn't know or think about natural gas emitting small amounts of radiation. WTF?
A few other common sources of radiation that I simply forgot about, was: drinking water, plane travel (I don't fly anyway), and the soil. I knew that radon gas comes from the soil, but I wasn't thinking about the soil being radioactive in itself. I'm sure that it depends on where you live, much like the radiation levels in drinking water from deep wells would be lower in less polluted areas, most likely. However, not everybody lives next to a nuclear power plant but, either way, drinking water often picks up tiny amounts of radiation anyway - from rocks and soil, etc., since the Earth, uh, contains radiation.

By what I can see, and this comes to no surprise, the medical imaging techniques, x-rays, etc., is one of the biggest sources of man-made radiation that you are most likely to get subjected to in high amounts. The majority of your everyday exposure to radiation comes from the Earth itself and from outer space - including our sun, although the atmosphere blocks most of it. Just think if we were like Planet Tatooine and had two suns! Anyway, that's another reason why flying in a plane or living in high-altitude areas will expose you to higher levels of radiation, since you are technically closer to outer space.

All I can say, is that you can't worry about everything. Some things, like some people, are just unavoidable and are as annoying as a stain that you can't remove. The way I look at it, the entire universe is radioactive evidently, including us, it is just that our bodies don't generally need to be bombarded by it. Of course, when many people are fighting things like Cancer, that may be their only hope of survival - at least for now. I hope the day comes when the medical field is advanced enough to cure cancer without radiation... At any radioactive rate, radiation can save you, kill you, or have very little impact whatsoever, but it is all around, regardless.

Just try to use some common sense, like: don't try to stick your head in the microwave when it is still on (Is that even possible? Ha!), try to not develop tanning bed addictions, don't run to the doctor every week and demand that you be given x-rays just for the sake of "getting checked out"- even though you have no symptoms of illness, etc. Blah-blah...

Related Link:  "Radioactive Gas in your Home?"
Posted by Obscurely Diverse at 12:05 AM