I don't usually have a lot of free time to simply browse through the world wide web in an aimless fashion, but when I do, I typically run across a lot of asinine, ridiculous, fictitious baloney!

This short post will be about cloud formations, and some guy's claim to use "psychic" telekinesis and the "Power of Thor" to alter the size and shape of clouds (making small clouds disappear or small ones get bigger, etc.), ha-ha!

This crap is funny, stupid, disgusting, and semi-entertaining all at the same time. However, I'm not going to post a link to this guy's website or provide YouTube videos of him chanting "cloud disappear, cloud evaporate, by the power of Thor...cloud go away," over and over again until the wind dissipates some tiny, far-away cloud over a course of a few minutes. If you're interested in watching these videos, just type "make clouds disappear using telekinesis" into the search engine of your choice or use a video search with similar terms, etc., and I'm sure you'll find 'em. Damn, where was Zeus when you needed him... Ha!

I also find it amusing how these "cloud magic" videos that are supposedly altering the clouds via some rare form of telekinesis, are being video taped during windy days, but I'll get to that in a moment.

This Mundane Blog isn't generally about myths, folklore or legends for that matter, but who is this Thor character, you may ask... 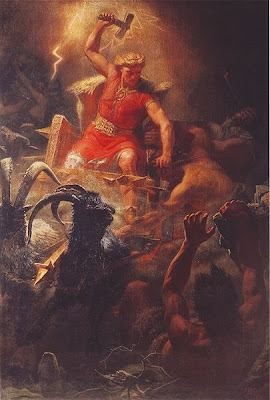 In Norse mythology, largely recorded in Iceland from traditional material stemming from Scandinavia, numerous tales and information about Thor are provided. Thor is a hammer-wielding god associated with thunder, lightning, storms, oak trees, strength, the protection of mankind, and also hallowing, healing, and fertility.
A Scandinavian folk belief that lightning frightens away trolls and ettins appears in numerous Scandinavian folktales, and may be a late reflection of Thor's role in fighting such beings. In connection, the lack of trolls and ettins in modern Scandinavia is explained as a result of the "accuracy and efficiency of the lightning strokes." Read more, here: http://en.wikipedia.org/wiki/Thor

Anyway, once again, since I refuse to fill this blog with links and videos that relate to horse shit, I decided to post a cool, calming cloud video that isn't claiming to be a work of magic, psychic phenomenon, telekinesis or psychokinesis, etc. This video gives the credit to the wind instead of magic, and the music goes great with these dancing clouds.
You can find this particular video, below:

---End of Post "Guy claims to alter cloud formations using Power of Thor - Ha-ha!"
Posted by Obscurely Diverse at 6:04 AM