Financial Responsibility Ticket? Pay the fines and get car insurance... 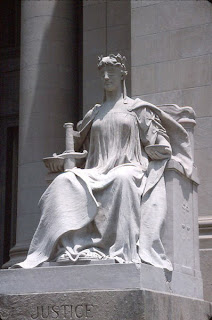 A while back, I got stopped at one of those lovely money-making road blocks hosted by State Troopers and local police...and I had no proof of car insurance, vehicular financial responsibility, road kill protection, whatever ya want to call it. I got my ticket and it was not one that you could pay by mail either, and had to appear in court a couple months from the date of my pull-over, and show proof of insurance to the holy judge, blah, blah...

I've been stopped a few times over the last several months (obviously my city must be conducting some sort of fund raiser and whatnot, as many people would refer to that as being "fundraising whores" or however you want to label it), and I've always just been told (after I got my petty citations of money-grubbing bliss) by other city cops that I need to make sure and get some car insurance - after they find out that I don't have it, of course. I realize, nowadays, it is State Law, and I've always had vehicular insurance before, but the last couple of years (okay, 3 or 4 years) I let my policy slip by, was a little short for cash, and simply drove without it for a few reasons. For one, during the majority of that time, I was riding with my live-in girlfriend to work, as we both worked at the same place. Well, when we split up, I would still drive to work with no car insurance, but mainly because I live in a small town with little traffic and I also work the night-shift, which makes a big difference when it comes to the odds of getting in traffic accidents. Basically, less cars on the road equals less idiot drivers, uh, you do the math...

Anyway, to top it off, after work, I would run most of my errands early in the day, so there really was not that many high-risk situations going on in my path of travel, and figured I'd save the money and get car insurance later on. Well, going back to my day of getting a ticket... I still waited another month before I got car insurance, and I had two months before I'd have to appear in court, so what did I care? Unlike what my State did in the past, when they used to drop the charges if you could show proof of insurance by the time of your court date, I already heard beforehand that the rules have changed, so why not save another month's worth of insurance, since I already know I'm screwed anyway? So, I waited until about a month before my court date to get insurance, and sure enough, it was a good thing because I got fined over 200 dollars whether or not I got it any earlier than that, albeit I have heard that if you can somehow get car insurance on the day of your ticket, that they may drop the charges in court. Either way, I didn't have a chance, since I got pulled over late at night. I mean really, what was I gonna do? Not go to work and run home and get online before midnight struck, just to get car insurance in hopes that they would drop my financial responsibility charge? Ha-ha!

I'm not promoting driving with no insurance, as it is definitely a wise thing to have, but I'm just saying that I believe it is my own gamble and choice that should be left up to me... Why should it be law to owe for something that you hope to never use? Car insurance usually boils down to three things: the vehicle itself and/or the vehicles involved in the accident, personal injury and/or bodily harm to the people involved, and property damage.
Sure, if I had a nice car, a new vehicle, etc., then I would be stupid to not have full-coverage insurance on it. ...But what if I'm driving some old car or truck, and really just don't give a shit if somebody hits it? If the other person cares about their ride, then it is their fault if they don't have insurance, not mine because I don't!
If we're talking about bodily harm, then what about health insurance? I have health insurance; is it my fault that you don't? If I do something stupid and injure a bunch of other people while driving, I'm going to have other problems, get sued, etc. Which is just another reason why I didn't haul a bunch of passengers around when I had no insurance, for example.
I really don't know the rules on property damage when it is caused by a moving vehicle, but my god! What do you plan on doing, running through a barn with your truck or to drive your car through a shopping mall? Property damage will most likely be the least of your concerns then, as life insurance and whether or not you have immediate medical care, may be higher up on the list if you get into those types of accidents and/or in that particular case of vehicular madness.

With all that being said, if ya get pulled over and get charged with a good ol' financial responsibility ticket, go get car insurance and show up to court with your proof of insurance from your desired company of choice - to silence the case of loosing your license to drive - and pay your damn fines and get it over with. Nobody really cares once you go into places like that; just nod at the judge, admit you are guilty, pay the money and go on with your life while hoping you never have to set foot in such corrupt, fund-collecting places like that again.

Speaking of other baloney tickets, why is there a "seat belt law?" I mean really, if I don't want to wear a seat belt, I shouldn't have to; it is my life. I can understand a child seat belt law, but I'm talking about adults here. WTF? Yeah, yeah... Just more evidence that the world has found a way to monetize almost everything possible. However, I'm still waiting on them to charge us for the air we breathe by setting up some sort of a "air quality meter" in the cities, and charge different rates based on the pollution and overall quality of the air. Of course, the better the air that surrounds your area, would of course mean a higher fee. Hey, if ya don't like it, go move to a polluted area where the air is free. Ahh, surely that will never happen... Ha-ha! Ha?

When thinking of traffic laws, why don't they better enforce a "no cell phone while driving law" that could actually save lives, instead of some of these other senseless money-making traffic laws that do nothing but cost people money!

Well, this post is getting rather long. Now that we got the "financial responsibility ticket = pay the fines and get car insurance..." out of the way, who do you choose for car insurance now?

This is not a promotional post, but I did get several quotes online and I will provide a link to what I found to be the best rate for me, as I only had to get liability on two old vehicles to meet the requirements of my beloved State Law.

At any responsible rate of monetary insanity, Progressive.com worked the best for me; check 'em out, if you're in the same boat as me, looking for fast car insurance quotes, was forced to get vehicular insurance by the law, and was short for time and money. Be safe on the road, now... It's expensive out there, ya know... Cheers!
---End of Post "Financial Responsibility Ticket?  Pay the fines and get car insurance..."
Posted by Obscurely Diverse at 9:57 AM