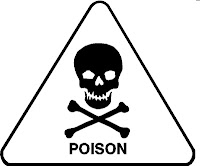 I recently stumbled across a video that spoke about the 10 most deadliest and/or lethal poisons (toxins) known to man, humans or however ya want to phrase it.

My first reaction was: Why would you want to air a video that broadcasts such things, as it may be fuel for an aimless idiot with nefarious intentions, to get motivated and scatter some of these proclaimed poisons of utter death and gloom. But then again, this is an open network here, so lets have some fun! Ha-ha!

From 10 to 1, the crazy, high-paced video speaks about the toxins: Cyanide, Anthrax, Sarin, Amatoxins, Strychnine, Mercury, Tetrodotoxin, Ricin, VX (used in chemical warfare as a nerve agent), and Botulinum Toxin (it is considered the most powerful neurotoxin ever discovered).

Watch the quick video "10 Deadliest Poisons Known to Humanity," below:


Since we are on this toxic subject, after viewing the video, I ran across a web page entitled "Deadliest poison known to man proves to be a savior," which spoke about one of those lethal toxins being used to help humans - in certain cases & doses, of course.

Also, the highly toxic "Amatoxins" listed in the video, stems from the "Death Cap Mushroom."
I once promoted a product (and still do today), Milk Thistle, that was used long ago for combating the ill effects of the poisonous Death Cap; although I didn't bother mentioning it being used for amatoxins (since that is not a common reason to need Milk Thistle) on the page I'm about to link to, you can still find the post about this beneficial, herbal form of liver detox, here: "Liver Detox - Milk Thistle."

Anyway, I hope everybody steers clear from the poisons listed above, and that you found the quick flick interesting, for what it's worth...

---End of Post "10 Most Lethal Toxins Known to Humans - Video"
Posted by Obscurely Diverse at 8:46 AM